On July 18, the Federal Government’s Department of Finance released a 63 page proposal on potential tax legislation reform directed at Small Businesses (who utilize a corporation to run their business).  The full proposal can be found here:  Tax Planning Using Private Corporations.  The general public has until October 2nd to provide comments, analysis and changes to the proposal and as a Practitioner who works with small business owners daily, I will be responding to provide my thoughts, insights and alternate recommendations to those provided in the proposal that paints all Small Business Owners and Entrepreneurs as “tax cheats”.

The individuals that I work with on a daily basis are hard working folks that take pride in the products and services they provide to the Community as well as ensuring their employees and team members are employed.  Small Business is the backbone of the economy of a community such as St. Stephen and other small to medium sized communities across Canada and this Proposal, in my opinion, will have a negative affect on Small Businesses.

The contents of this Proposal affect everyone in a Community such as St. Stephen.  It not only affects the Small Business Owners who are directly affected, it trickles down to their employees, their clients and customers, their suppliers and the residences of the Community in which they live.

So why am I so wound up?

I am not going to spend the rest of this blog on the deep technical aspects of the proposal, however, I will highlight the three issues and what it means to a Small Business Owner, so you can get a sense of the reason for this blog.

The other item being challenged is the Lifetime Capital Gains Exemption which as been available to Small Business Owners if they sell the shares of their Corporation.  For example, if a husband and wife own a business 50/50 and they sell their shares, each shareholder could shelter $835,000 of a capital gain on their shares of the business.  (There is another section of the Income Tax Act that deals with this, and we will leave that for another day).  Under the Proposal, the concept of utilizing more than one capital gains exemption on a small business would be disallowed.

So those are the three items within the Proposal that have me wound up.  They are not legislation yet, and this is why I feel it is extremely important provide my thoughts, opinions and insight into the Public Consultation on this Proposal. 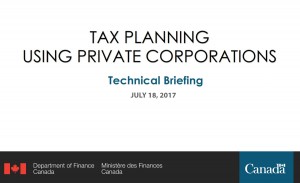 The examples fell short in comparing an employee taxation situation to that of a Small Business Owner who operates their business within a Corporation.  There are benefits to being an employee that are not afforded to a Small Business owner such as Employment Insurance benefits, Maternity and Paternity leave, and Small Business Owners carry a higher level of risk to earn income.  These risks include investment of capital, significant investment of time, maintaining customers and clients which generate income, providing jobs and saving for their own retirement with after tax income from their business.

In closing, I will be providing a response to the Proposal prior to October 2nd.  I will also be scheduling a meeting with our local MP to discuss this Proposal and the affect that these proposed changes could have on Small Business Owners as well as our Community, whose economy is driven by Small Business.  I am afraid that if these proposed changes become legislation, coupled with the recent legislative changes to the Small Business Limit, it will have a significant negative impact on Small Businesses.  It could mean the loss of jobs or businesses as Small Business Owners will have to cut in areas of their business in order to meet the new requirements of this Proposed Legislation.

I encourage you all to reach out if you have questions or would like to voice your concern, I would suggest discussing this with your local MP or writing a letter.  I will keep you posted on my response and our efforts to make the Small Business Owners’ voice heard.